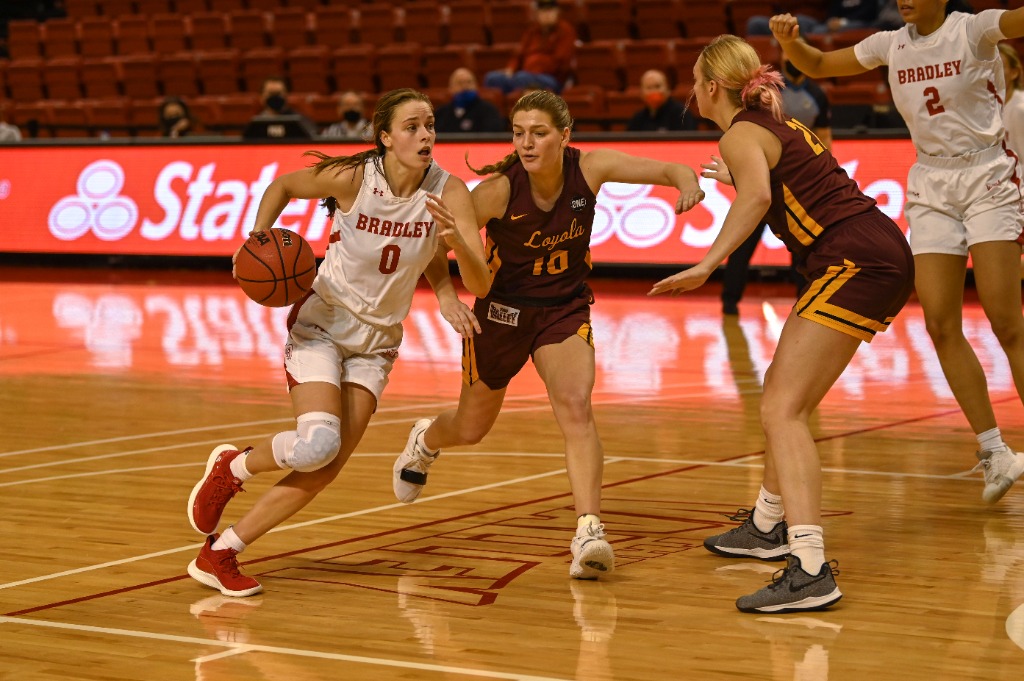 For the first time since the 2014-15 season, Bradley lost 10 straight as the Braves failed to overcome a 15-point second-half deficit in a 48-41 loss to Loyola-Chicago Thursday evening at the Renaissance Coliseum.

Prior to the whistleblowing, Bradley found himself at a disadvantage as freshmen Abbie Draper and Caroline Waite were unable to join the team due to COVID-19 protocols. With 5th-year guard Gabi Haack out for the season, Waite is Bradley’s leading scorer, averaging 13.5 PPG.

Extremely thin at guard, Bradley looked to his veterans to lead the way. Senior guard Chloe Rice led BU with 11 points and also had six rebounds. Senior Aannah Interrante, who averaged just over two minutes per game heading into the contest, recorded a season-high eight points.

Bradley was challenged from the start by Loyola’s backcourt, namely second Mya Chandler. The reigning MVC Freshman of the Year scored the first nine points of the contest en route to a record-breaking 19-point outing. Graduate Bre Hampton-Bey joined Chandler in double digits with 10.

The Ramblers’ leading scorer, Allison Day, had just six points, but the senior forward surpassed 1,000 career points with a 14-foot jumper in the 3rd quarter.

Loyola jumped on the Braves early on, taking a 14-4 lead after the first quarter. After shooting just 2-15 in the first frame, BU bounced back to shoot 6-15 in the second quarter and entered the locker room trailing 26-18.

Out of the locker room, the Ramblers’ defense got the hang of it and increased their lead to 39-24 with 4:52 left in the third quarter.

Early in the fourth quarter, the Braves went 10-0, led by two buckets from junior forward Sierra Morrow and hat-tricks from seniors Rice and Interrante.

Bradley’s defense remained persistent in the final quarter and held Loyola scoreless on the field for the final 7:23 of the game. Unfortunately for the Braves, they only managed two shots from the floor in that span and never came within five points before the Ramblers finished with free throws.

The match was a defensive battle to the wire and that was reflected in the box score. Bradley held Loyola to a 35% field goal percentage for the game, including 2-8 in the final quarter. However, the number that jumped off the page was Bradley’s shot: 16-60 – good for 26%.

For the first time in 45 days, the Braves hosted a DI opponent inside the Renaissance Coliseum. Their last home match in D1 also turned out to be their last victory – November 19 against Wisconsin, a 64-57 victory.

“We didn’t want to run too much today because there were too few of us, but because we weren’t running in transition, all of a sudden we were going slow in half court. It was probably not the right decision because we had never slowed down before, we are not a team to slow down. Bradley head coach Andrea Gorski on Bradley’s game plan and his slow start.

“16 for 60, I can’t say anything more. You have to make shots,” Gorski on the offensive outing.

“[It was the best defense] of the season so far… Honestly, I thought we would have a hard time keeping them in our [man-to-man], but it was really good in stride. I thought we were disciplined, and we struggled to do that at times,” Gorski on the defensive effort.