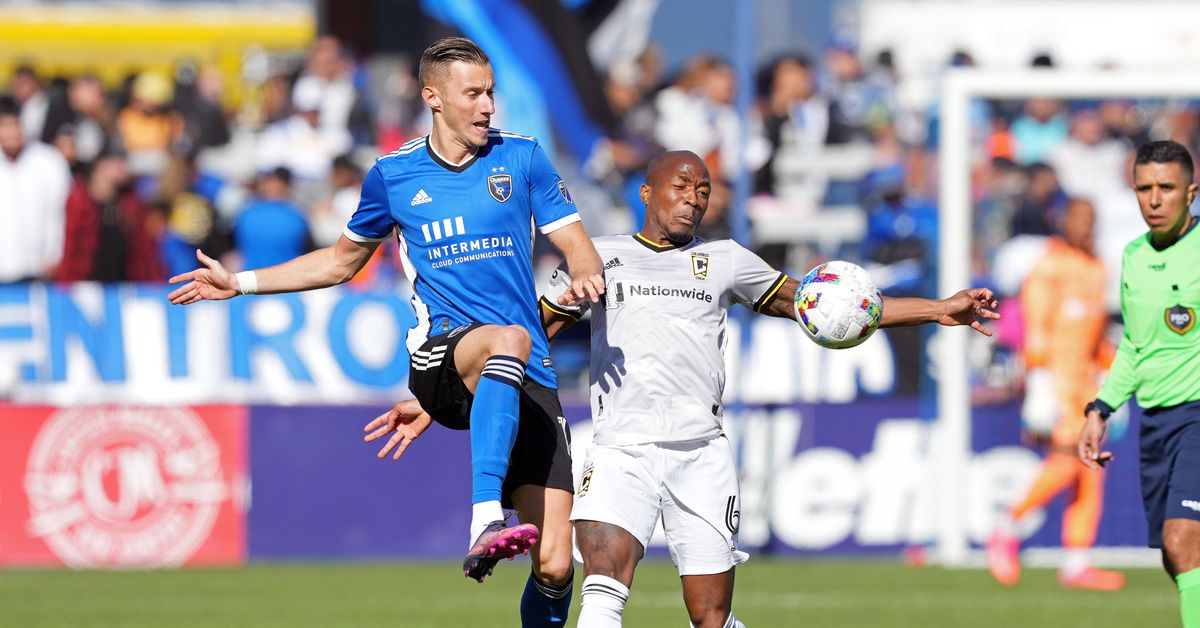 After a crushing 4-0 win to start the 2022 MLS regular season, the Columbus Crew played a much different game against the San Jose Earthquakes in a 3-3 draw on Saturday night. Columbus fell early, came back to take a two-goal lead, then squandered it in the final 10 minutes.

Here’s how we rated the crew’s individual performance.

Éloy Room (4.5) – On the ninth-minute penalty, Room put a finger on Cristian Espinoza’s shot but it wasn’t enough to stop the powerful kick. Room saw three shots on goal in the course of play and had one save. On San Jose’s other two goals, Room didn’t come close to a chance. The first 84and minute saw the keeper go down in front of a close-range chance from a save, which would have been hard to stop. Six minutes into the second-half stoppage, Room stood still from a thunderous header to cost the Black & Gold two points.

Pedro Santos (6.5) – Santos put in his second consecutive solid performance for the Crew, as the new left-back. Offensively, Santos sent in a few crosses, but he had a greater impact on the defensive side of the ball. Santos cleared the ball three times, blocked three passes and intercepted three pass attempts.

Jonathan Mensah (5.5) – In the course of the game, San Jose had nothing. Mensah did well defensively, but a fall in the box late in the game was significant. It wasn’t a foul against Mensah, but the leaping Francisco Calvo was scored by Mensah in the dying moments of the match.

Milos Degenek (5.0) – Agree with the penalty or not, Degenek’s foul led to the penalty in the ninth minute. The centre-backs’ cleats entered midfielder Paul Marie’s foot, which would have qualified as a foul anywhere on the pitch. Overall though, Degenek put in a solid performance which is unfortunately highlighted by an error.

Steven Moreira (7.5) – Moreira had a fantastic match in black and gold. It was probably his best, which says a lot about his quality since joining at the end of 2021. Moreira’s 40th-minute assist came from two broken tackles along the penalty area. Throughout the game, any rare chance in San Jose’s offensive end was met with heavy pressing from Moreira.

Darlington Nagbe (6.5) – Nagbe had an expected game from midfield. He completed 100% of his 43 passes and caught the attention of the Quakes. Nagbe normally receives attention due to the way he maintains possession under pressure. In the 33rd minute he was fouled by Jamiro Monteiro for a red VAR. In the 72n/aNagbe was fouled at the edge of the penalty area leading to the goal from Zelarayán’s free kick.

Arthur (6.0) – Artur had a huge performance against the Whitecaps to start the season, but got down to earth a bit against San Jose. It’s not an insult by any means, but Artur wasn’t shooting and attacking the same way against San Jose. Even so, Artur performed well in midfield, making no mistakes and passing at 91%.

Lucas Zelarayan (9.0) – This high rating is not only for his two goals, which were fantastic. Zelarayán was everything the Crew needed in an attacking facilitator. San Jose had no response for his move and connecting with his teammates could have led to more goals if defenders hadn’t impeded shots. Goals are definitely part of the standings. Zelarayán’s first arrival was one that Crew supporters saw moving away or rising throughout the match compared to the others. The free kick (his seventh since joining Columbus in 2020) was the icing on the cake and ended up saving the Crew from losing all three points.

Yaw Yeboa (4.5) – Yeboah reached 90 minutes of fitness and played pretty much every minute of the match, but the performance was not there. The winger wasn’t as active in the attack in the first half as he was on matchday one. He found a balance early in the second half, taking a few shots, but with defenders in his way. In the 74and minute, Yeboah had his only dangerous run of the game but led a tackle he hoped was a foul against San Jose.

Derrick Etienne Jr. (7.0) – Etienne’s score would be much higher if his shots found the net. He cemented his place as the starting left winger with dangerous passes, well-timed runs behind the defense and attempts on goal. Against a team that was not behind, with only 10 men, these shots would have found the goal. He did, however, add one assist to his season stat line.

Miguel Berry (5.5) – Berry did not add any dangerous chances on goal. His only strong chance came in first-half stoppage time when Berry received the ball, turned to his left in time to shoot on goal but sent the ball wide. Berry showed visible frustration after the miss, but he still had some positives. The connection with his teammates in the final third was strong and selfless in times when it was needed.

Gyasi Zardes (6.0) – Zardes entered the game for Berry in the 65and minute. In the 68and, Zardes signed up on the score sheet. Bringing in Zardes for Berry is a similar change that doesn’t give the Crew any performance hit up front.

James Igbekeme (5.0) – Igbekeme arrived too late for the fans to see much of him in the first game of the season. Against San Jose, the loanee had time to show his skill on the court. He played well in the extra minutes, putting pressure on the Quakes midfielder, adding an interception and getting a good shot that was deflected. Igbekeme received a yellow card for a late foul which led to San Jose’s second goal.

Aidan Morris (N/A) – Morris arrived at 89and minute, playing seven minutes including stoppage time. He earned a foul on the Crew after being tackled near the goal line, showing the restlessness Morris is known for on the pitch.

Caleb Porter (7.0) – Porter brought home the same 11 as the season opener and overall the team played a good 75 minutes. Porter’s substitutes made sense. Artur continues to develop his fitness, Zardes came on and scored a goal and Morris/Anibaba came on to help seal the game. Unless you were hoping Porter came into the box and the man scored, there wasn’t much else he could have done to stop the final 10 minutes of the game.