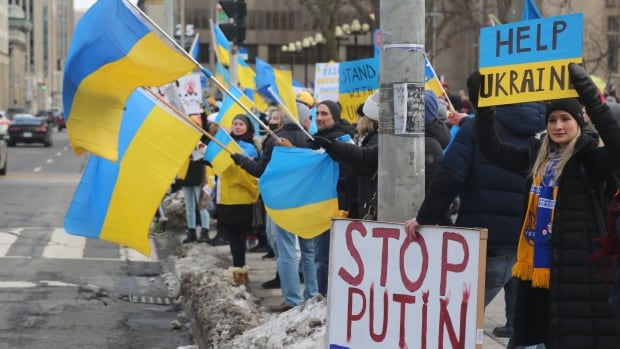 It took all the blue and yellow cloth from a Hamilton-area store to create the 40-foot-long Ukrainian flag that Orysia Foster sewed with the help of two of her friends.

She stood behind her on Sunday as hundreds gathered in Hamilton to do the same – standing behind Ukraine, protesting the Russian invasion and calling for peace.

“If Russia stopped the war, this would all be over, but if Ukraine stopped fighting, there would be no Ukraine.”

Foster, who has family in Ukraine, was part of a deluge of blue and yellow that filled the forecourt of Hamilton City Hall, one of many protests across the country over the weekend.

“There are so many people here who are not Ukrainians and it’s heartwarming to see all the support,” she said.

Larysa Zariczniak, president of the Ukrainian Youth Association of Hamilton, was also encouraged by the size of the crowd.

She was one of the speakers who addressed them, describing the pain of seeing what is happening in Kyiv, the capital, where she previously lived and the fear that comes with having friends who fight.

“It breaks my heart what is happening to my city,” Zariczniak said. “This country is part of my soul.”

Zariczniak recorded a video during the protest and said she had already shared it with a commander she knows who is on the front lines in Ukraine.

“Showing them that we in Canada, who are thousands of miles away, support them in every way we can, it honestly makes it a lot easier for them to fight back.”

The Ukrainian president’s office announced on Sunday that a delegation would meet with Russian officials at a location along the Belarusian border.

The news came after Russian President Vladimir Putin ordered his country’s nuclear forces to be placed on high alert in response to what he called “aggressive statements” from major NATO powers.

Konstantyn Sheweli, President of the Hamilton Branch of the Ukrainian National Federation, urged Canadians to help secure the freedom of future generations of Ukrainians.

“This attack on Ukraine is also an attack on democracy and the world as we know it,” he said.

The federal government has also imposed sanctions on Russia and directly on Putin and his entourage of advisers.

The UN said it had confirmed at least 240 civilian casualties, including at least 64 people killed, in fighting in Ukraine that erupted since Russia invaded on Thursday – although it believes the ‘true numbers are considerably higher. high” as many casualty reports remain to be confirmed.

Local MPs and Hamilton Mayor Fred Eisenberger were among those who spoke at the rally on Sunday, saying the city would welcome refugees fleeing the invasion.

The former MP for Hamilton Center made seven trips to Ukraine as an election observer during his tenure.

He described the Russian invasion as “absolutely heartbreaking” and a “punch”, describing Putin as a “bully”.

Speaking to CBC, Christopherson recalled a scene from his first visit to the country where he saw a father handing his son a ballot and showing him how to vote.

“Then he looked at his son and said, ‘This is how we keep our country'”, says the former elected official. “That image has stayed with me, for two decades now.”

Former MP says individuals can have an impact

He called on Canadians to attend protests, contact their MPs and call local Ukrainian churches to ask how they can help.

“It’s one of those times where yes, there are massive armies and big geopolitics at play,” Christopherson said.

“But what will make the ultimate difference is if enough citizens around the world stand up and say ‘No. This is not acceptable and I support those who will stop it. “”