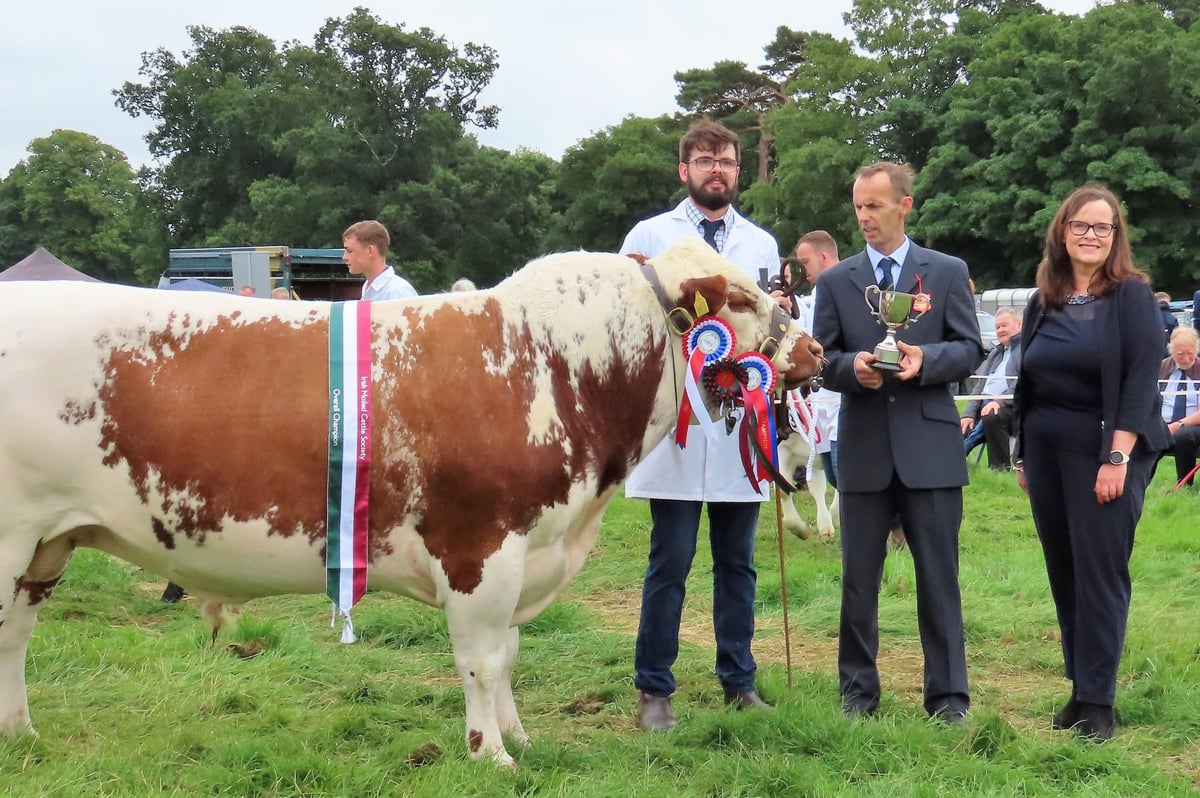 Judge Trevor Chadwick of Co Galway was delighted with the turnout, level and presentation of the stock and the way the stock were handled and well behaved, a real honor for all stockmen involved.

It was quite a spectacular sight for all who watched, especially the young heifer and heifer classes when the ring was filled with top quality animals, approaching ten entries in each of those classes.

The junior heifer class provided the spectators in the ring with a truly phenomenal spectacle due to the exceptional participation of yearling heifers of exceptional quality.

The cream of the crop was the formidable heifer, Curraghnakeely Pandora 0564, sired by Waikato Alister. Second and third place went to successful new breeders in their first year on the show circuit Irish Moiled, Rachel and Mervyn Garrett of Carrickfergus with two beautifully presented heifers, both sired by Woodbine Casper, Raveglen Mary took the second place and Ravelglen Bidi took third place.

The senior bull class was the class from which the judge, Trevor Chadwick, would choose his overall supreme champion.

The top two spots in this class went to bulls bred by Ciara and James White, Co Wexford, both sired by Tully Jack EX92, both displaying great power, strength and plenty of breed character.

There may have been only one entry in the junior bull class, but the quality was abundant, as the judge noted. A promising young bull Curraghnakeely Rojo sired by Waikato Alister deservedly won the red rosette, exhibited by N and M Moilies (Nigel Edwards and Michelle McCauley).

The second largest class of the day was the heifer class and the placings were hotly contested as the quality was exceptional in all entries. A showy and elegant heifer born in December 2021, Ballyreagh Lily 6757, sired by Waikato Alister, took first place.

An exhibitor’s champion pairs were won by Andrew McConnell with his senior bull, Woodbine Eddie and his senior cow, Derrypark Iris.

The judge noted that the junior handling class is one of the most important classes of the day. He said he loved seeing young people actively involved and enthusiastic about the Irish Moiled breed.

The judge commented on the professionalism of these young people during the presentation of their animals. First, Hollie O’Rourke, second, Sommer Garrett, third, Emily Scott and fourth, Cary Logan.

The first and second place winners in the bull and heifer classes presented themselves to be judged in the calf championship. Ballyreagh Lilly 6757, the heifer exhibited by N and M Moilies (Nigel Edwards and Michelle McCauley) was crowned overall champion calf along with reserve heifer champion for bull calf winner Ravelglen Earl owned by Brian O’Kane.

The first and second prize winners in the Senior Cow, Senior Heifer and Senior Bull categories presented themselves to be judged in the Senior Championship.

Breed Secretary Gillian Steele presented Rachel Garrett with the Perpetual N and M Moilie Cup for the top novice breeder with the most shows.

The Irish Moiled Cattle Society would like to thank the Randox Antrim Show for hosting the Northern Ireland National, to judge Trevor Chadwick who did a phenomenal job judging the largest attendance of Irish Moileds to date.

To the Stewards who were fantastic to keep everything running like clockwork, to the Sponsors Fane Valley, Ulster Bank, Laurel View Farm, David and Sandra Scott and finally to all the exhibitors including the Junior Handlers for putting on a fantastic show of Irish Moiled cattle.