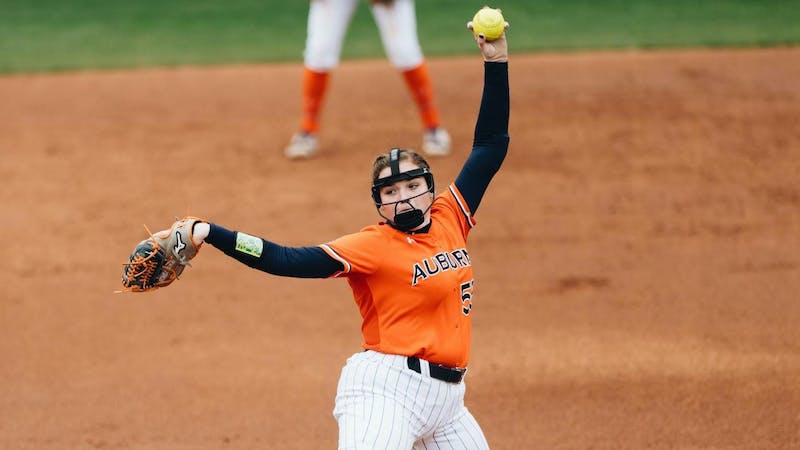 No. 18 Auburn splits two series weekend games at No. 8 Kentucky

Friday night, after suffering a loss at the hands of No. 8 Kentucky, No. 18 Auburn shared a pair of weekend games against the Wildcats. The Tigers’ record is 27-4, going 6-3 in SEC play.

Seeking to tie the series on Saturday, Auburn set the tone early with three runs in the first inning. The Tigers never looked back, claiming a 6-3 victory to set up a decisive third game on Sunday.

“When this team is comfortable on the field, it’s fun to watch,” Auburn head coach Mickey Dean said. “We’re young. We’re not always going to be pretty, but we’re going to be beautiful for you in the end.”

Auburn started Maddie Penta on the mound. Penta would pitch a full game, allowing seven hits and just three runs, while knocking out four Wildcats en route to their 17th win of the year. Kentucky leads the SEC with a .356 batting average, but Penta held the Wildcats to a .250 batting average.

“Amazingly, despite the cold, all of my shots were working well, especially my rising ball,” Penta said. “I just kept getting ahead of the hitters and trusting my defense behind me, that’s all you can do.”

Penta had a lot of early runtime support. After Makayla Packer and Jessie Blaine singled in the first, Lindsey Garcia homered to give the Tigers a 3-0 lead before Kentucky came to bat. Garcia also hit a home run in Friday’s contest.

“We guessed too much at the plate,” Garcia said. “Today we were focused on chasing the ball. When a pitch that we like and which is in our area comes up, we attack it.”

The Tigers would strike again in the second, when Carlee McCondichie reached second on a Kentucky error, moved up to third on wild pitch and scored on a sacrifice fly from Nelia Peralta to put Auburn ahead 4 -0.

In the fourth, the first three Tigers reached as Sydney Cox earned a walk and Rose Roach scored a single, followed by a McCondichie RBI single to make it 5-0. After a sacrificial bunt, Peralta struck in another downfield run to put Auburn up 6-0. These would be Auburn’s last races of the day.

Kentucky would try to recover, with a two-run homer from Renee Abernathy in the bottom of the fourth cutting Auburn’s lead to 6-2. The Wildcats would charge the no-outs in the fifth inning, but Penta and the Tigers would escape the block, allowing just one run to score.

The Wildcats again threatened in the seventh. A walk and error, Auburn’s third of the game, brought the tying run to the spot with no outs. A double play and a flyout later, however, Auburn was celebrating a 6-3 road win.

The victory gave the Tigers a chance to clinch the series on Sunday.

Despite taking a three-point lead in the seventh, Auburn couldn’t hold on and suffered a 5-4 loss to lose the series to Kentucky.

The Tigers started Shelby Lowe, who pitched for 6.1 innings, striking out nine and allowing six hits and three runs, two of which were earned.

Bri Ellis hit two solo home runs for the Tigers. Ellis’ first came in the second inning to open the scoring. After Blaine hit a solo homer in the fourth inning, Ellis followed with his second of the game, giving the Tigers a 3-0 lead in the fourth.

Kentucky would respond late in the inning with a solo home run from Erin Coffel, cutting Auburn’s lead to 3-1. In the sixth inning, however, Auburn got what looked like a big insurance run as Garcia hit a double and headed home to score on an Aubrie Lisenby single.

In the bottom of the seventh, with Auburn up 4-1, it looked like the Tigers were on the verge of a road series victory against a top-10 team. Then the game fell apart on the Tigers.

Lauren Johnson had a brace for the Wildcats and came home to score on an error, reducing Auburn to 4-2 with no outs.

After a sacrificed pitch moved the runner up to second, Dean decided to pull Lowe out of the game and replace her with Penta, who had pitched all seven innings the day before.

Penta allowed a single to Coffel, putting runners in the corners with just one out and bringing the winning run home. That winning run was Renee Abernathy, who had already hit two home runs and 8 RBIs over the weekend, including the grand slam that ended Friday’s game.

For the second time, Abernathy left him for the Wildcats, hitting his third homer of the series. Unlike the first start, however, this gave the Wildcats a win from behind. Penta only suffered their second defeat of the season.

The Tigers were hurt by mistakes on their part, committing five errors. Packer had one in the first inning and Rose Roach had an error in the fifth.

Second baseman Sydney Cox had three errors, including one in the seventh inning that resulted in a run. The Tigers entered the game with just .960, the fourth-worst roster percentage in the SEC.

“Our defense let us down today,” Dean said. “We made five errors on easy, routine plays. We never would have faced the heart of the Kentucky roster in the seventh with a clean game. We played hard, but we have to do the little things.

The Tigers will look to bounce back from that tough series loss, their first of the season, when they host Alabama State on Wednesday. That will be followed by a three-game home series against No. 6 Florida next weekend.

Xref: Why show vulnerability as a leader?