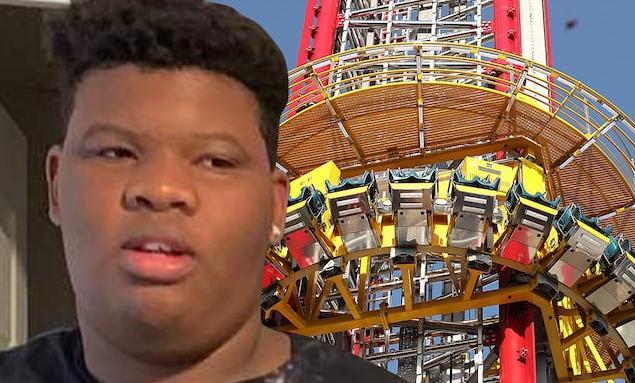 *The parents of Samson tire – the teenager who fell to his death on a ride in Florida – now claims the 14-year-old shouldn’t have been allowed to board the ‘Free Fall’ ride in the first place. Nekia Dodd and Yarnell Sampson filed a wrongful death lawsuit against ICON Park, via attorneys Michael Haggard (the managing partner of Harrard law firm) and Ben Crump.

The lawsuit is also against relevant associates of ICON Park and the operators of the freefall ride itself. The parents claim the neglect caused their son’s death, reports TMZ. According to the lawsuit details, the parents allege the park had height and weight restrictions that their son violated because he never saw the signs or site staff never reported them. Parents say there were no signs to guide people and no one who worked there said anything either, so Tire Sampson walked in assuming everything was safe.

“You didn’t want to miss a dollar. But you robbed me of my son. So yeah, it’s disgusting,” Dodd said at a news conference, sitting with the attorneys.

Moreover, they claim that the ride itself was not safe enough, compared to other similar rides; that similar types of free fall are usually also protected by a safety belt, in addition to the shoulder harness. They insist it was standard operating procedure (SOP) that ICON Park failed to follow as the ride did not have a seat belt and they believe this contributed to the ejecting their son from his seat before collapsing to the ground.

“If it [seatbelt] would have been used as a secondary restraint, Tire Sampson would not have died,” Haggard, the family’s attorney, told a news conference.

As reported, Tyr fell from a height of 100 feet and died. The parents also claim strict liability against some of the defendants, apart from negligence. They are asking for damages and a jury trial before a judge.