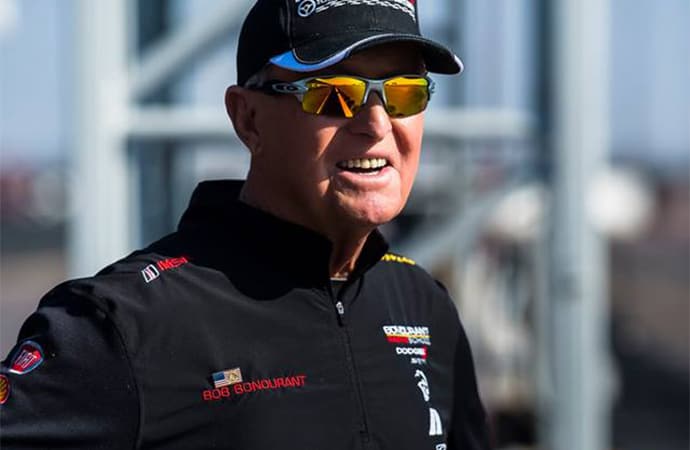 Champion racing driver Bob Bondurant, who returned from injuries sustained in an accident that ended his racing career to create an iconic ‘high performance driving’ school, has died in Paradise Valley, Ariz. age 88.

While Bondurant was well known in the 1960s for his dominant driving skills which earned him championship trophies and a coveted place on Carroll Shelby’s racing team, he later became more widely known as founder and owner of the revolutionary Bob Bondurant School of High Performance Driving.

The cause of death was not revealed in a family obituary, but Bondurant had been in an assisted living facility in the Phoenix area for some time.

Bondurant’s story is one Success against all odds, evolving from humble beginnings in motorcycle racing, reaching the top among America’s racing stars, then turning a crippling injury into a rewarding opportunity.

In 1963, impressed by Bondurant’s success in West Coast sports car racing, primarily Corvettes, Shelby asked Bondurant to join his Ford-powered Cobra team. In 1964, Bondurant went with the team to Europe to drive Cobras, competing at Spa, Nurgurgring and Targa Florio.

At the wheel of the Cobra Daytona coupe, newly designed by young visionary Peter Brock, Bondurant and Dan Gurney won the GT class at the 24 Hours of Le Mans, a resounding victory and a first for an American team. Bondurant followed this in 1965 by helping Shelby’s team win the FIA ​​Constructors’ Championship.

He was at the top of the racing game in 1967, having claimed victory in a multitude of Corvettes, Cobras, prototypes and other competition machines, most notably in Europe in the company of American racing heroes such as Shelby, Gurney and Phil Hill.

“Bob is the first and only American to bring the World Sports Car Championship trophy back to America in the legendary Shelby Daytona Coupe # 26. He then rose to the highest level in racing with Ferrari in Formula 1 and in prototypes.

Bondurant left F1 where he was just starting to excel so he could race in the fast and aggressive Can-Am series, along with his close friend and team driver Peter Revson.

He was driving a Lola T70 Mark II at Watkins Glen on June 23, 1967, when everything suddenly changed. A steering arm broke at 150 mph, causing a severe accident in which the car rolled eight times. Bondurant was fortunate enough to survive, but among his various serious injuries was terrible damage to both feet.

Bondurant later recalled that one of his first questions to doctors was when he could drive again. They replied that he should instead be worried about whether he would ever walk again.

(Note that Peter Revson was killed in 1974 in a tragically similar crash during testing for the South African Grand Prix, when a failure of the front suspension on the Shadow DN3 he was driving caused a severe crash of the car against the barrier wall of the track.)

During the months of convalescence that followed the accident at Watkins Glen, Bondurant reflected on what should follow the end of his piloting career. In his hospital bed, he mapped out blueprints for a driving school like no other, a school that would teach students the intricacies of controlling a car, whether they are experienced racers or aspiring racers, or regular drivers who want to hone their daily skills.

Bondurant already had experience as a driving coach, having taught actor James Garner how to drive on a racetrack so he could play with a realistic portrayal of a Formula 1 driver for the film. acclaimed. grand prize, directed by John Frankenheimer.

Shelby had created a small performance driving school at Riverside Raceway in California but was on the verge of abandoning it, just in time for Bondurant to take over. While Shelby had used three Mustangs for his student cars, they weren’t included in the deal, and Bondurant started his school using three Datsuns.

Datsun even featured Bondurant in an advertisement for 510 sedans:

As the story goes, when the school opened in 1968, it had three students. The following week he had two more, but they were leading Hollywood actors Paul Newman and Robert Wagner. Newman became passionate about motor racing and has remained a close friend of Bondurant.

From there word spread and the school was so successful that Bondurant moved it in 1971 to a larger facility at Ontario Motor Speedway in California.

But the total package materialized in 1990, when he moved the school to its own purpose-built facility in Chandler, Arizona, just south of Phoenix, which offered a technically challenging 1.6 hands-on course of Bondurant’s own design. Ford sponsored the school for a number of years, supplying Mustang and Formula Ford open-wheel racing cars, followed by sponsorship from General Motors and, currently, Fiat-Chrysler.

Celebrities are always a part of the scene – Christian Bale took the course in 2018 in preparation for his role as pilot Ken Miles in Ford vs. Ferrari – but the main aim of the programs is to teach car enthusiasts the intricacies of sporty driving, both for safety and to get the most out of high performance automobiles.

The instruction also included specialized courses for police and security personnel, as well as teenage drivers who learned the basics of security and control. And of course, aspiring and experienced racing drivers hone their craft.

In 2018, the Bob Bondurant School of High Performance Driving celebrated its 50th anniversary, but storm clouds were looming on the horizon. In October 2019, the school – which was operated by Bondurant’s wife Patricia as chief executive officer – declared Chapter 11 bankruptcy protection and reportedly sought a buyer.

The school closed and was then sold to an investment group in March 2019, with the new owners including three car and driving enthusiasts who named their business Stig Investments after the famous anonymous racing driver from the British television series. Top speed. The price tag was reported at $ 1.675 million.

Investors pledged to keep the school going with a hands-on approach, and they renamed it Bondurant High Performance Driving School. The school was quickly reopened with the new team at the helm.

Earlier this year, the owners announced the Bondurant name was abolished, the school renamed Radford Racing School, in part because of copyright issues with the Bondurant family. Pat Bondurant remains the President and CEO of a business entity called Bondurant Racing School.

But even as Radford, Bondurant’s dream lives on, as the school continues to teach new generations of students the methods the star pilot devised during his flying career. And they’re taught on the hands-on course Bondurant designed to present a series of technical challenges to drivers, both experienced and novice.

Information on the funeral has not been announced, although instead of flowers, the family is requesting donations to be made to Team USA Scholarships, which can be contacted at [email protected]

Your guide to the games of week 10

On Monday, an actor on the Master Chief TV show teased the news of Xbox’s 20th anniversary.