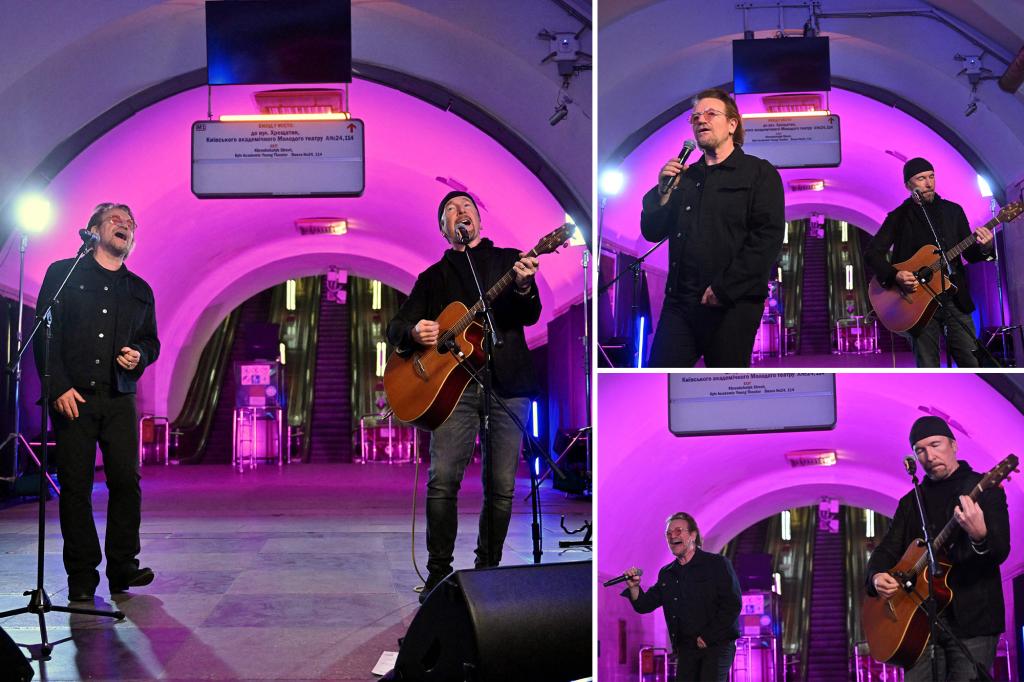 Bono and The Edge of U2 performed a surprise concert at a kyiv metro station on Sunday at the request of Ukrainian President Volodymyr Zelensky.

The superstars performed U2 classics such as ‘With or Without You’ and ‘Angel of Harlem’ as well as a cover of Ben E. King’s ‘Stand by Me’ – although they changed the lyrics to ‘Stand by Ukraine”.

“President Zelensky invited us to perform in Kyiv as a sign of solidarity with the Ukrainian people and so that is what we came to do,” he added. the group tweeted from his official account in a post signed by Bono and The Edge – who played acoustic guitar for the makeshift subway gig.

U2 singers performed on the central platform of the Kyiv metro as Ukrainian transit stations turned into de facto bomb shelters for residents to hide from Russian attacks.

Videos on social media captured the emotional event in the capital of the Eastern European country.

Bono and The Edge were accompanied for part of the performance by Ukrainian band Antytila, whose member Taras Topolia joined the country’s army to fight the Russians and can be seen singing in his army fatigues.

U2’s performance comes a month after Zelensky gave a special speech at the Grammys urging American musicians to use their platforms and talents to “speak the truth about” the war.

“Fill the silence with your music!” Zelensky said at the time. “Fill it in today to tell our story. Tell the truth about this war on your social networks, on TV. Support us in any way possible. Any, but not silence. And then peace will come.

“Our musicians wear bulletproof vests instead of tuxedos,” he added. “They sing for the wounded in the hospitals. Even to those who cannot hear them. But the music will break through anyway.

“Ireland’s grief and pain is now Ukraine, and Saint Patrick’s name is now Zelensky,” the poem concludes, equating the legendary Christian missionary with the warlord.