When a 31-year-old black Cleveland activist named Antoine Tolbert openly carried a shotgun down St. Clair Avenue on the East Side of Cleveland recently, he was breaking no law.

It has always been legal in Ohio to openly carry a firearm in your hand or in a holster outside of your clothing. Tolbert had a shotgun in one hand and a handgun in a holster on his leg.

He still found himself in jail for one night after a very tense encounter with the police. The repercussions that followed completely changed his life.

In the video Tolbert made of the encounter, a police officer can be heard saying, “Sir, you can’t walk down the street with a gun in your hand.”

“This is an open carry state,” Tolbert said in response.

“Drop your gun. Drop the gun,” several officers were heard yelling at Tolbert.

The Ohio Constitution guarantees the right to bear arms. According to Buckeye Firearms Foundation executive director Dean Rieck, Tolbert was not committing a crime.

“There is no legal reason for the police to arrest anyone for open carry who is not otherwise committing a crime,” Rieck said.

A spokesperson for the Cleveland Police Division did not respond to questions about Tolbert’s arrest or whether the department was reviewing the officers’ actions.

Tolbert’s walk started at Rite Aid on the corner of East 105e Street and the last encounter with police was at East 89th Street.

The first call to the police was made by someone at this pharmacy who saw Tolbert pull a shotgun from the trunk of his car. The police report said people were running and screaming when they saw Tolbert wearing a bulletproof vest and carrying his shotgun.

Tolbert disputes this description of the scene outside the Rite Aid.

“The crazy thing is that we do these armed patrols once a week, especially when the weather gets warmer.” Tolbert said during a visit to the neighborhood a week after the incident.

Tolbert is president of a community organization called New Era Cleveland. One of the things they do is organize armed patrols in neighborhoods where there is gun violence.

Tolbert’s group, which has been featured by Vice Media and local TV news, began patrols last year. They usually go out in groups.

Tolbert went out alone on the morning of May 23 – shortly after 14-year-old Abe’bre’anna Jackson was killed by gunfire that hit her nearby home.

That’s what Tolbert told Cleveland’s first policeman to stop and ask him what he was doing.

This officer let him continue on his way.

Another, identified in the police report as Patrol Officer Santa, stopped shortly after, and their encounter was caught on video. 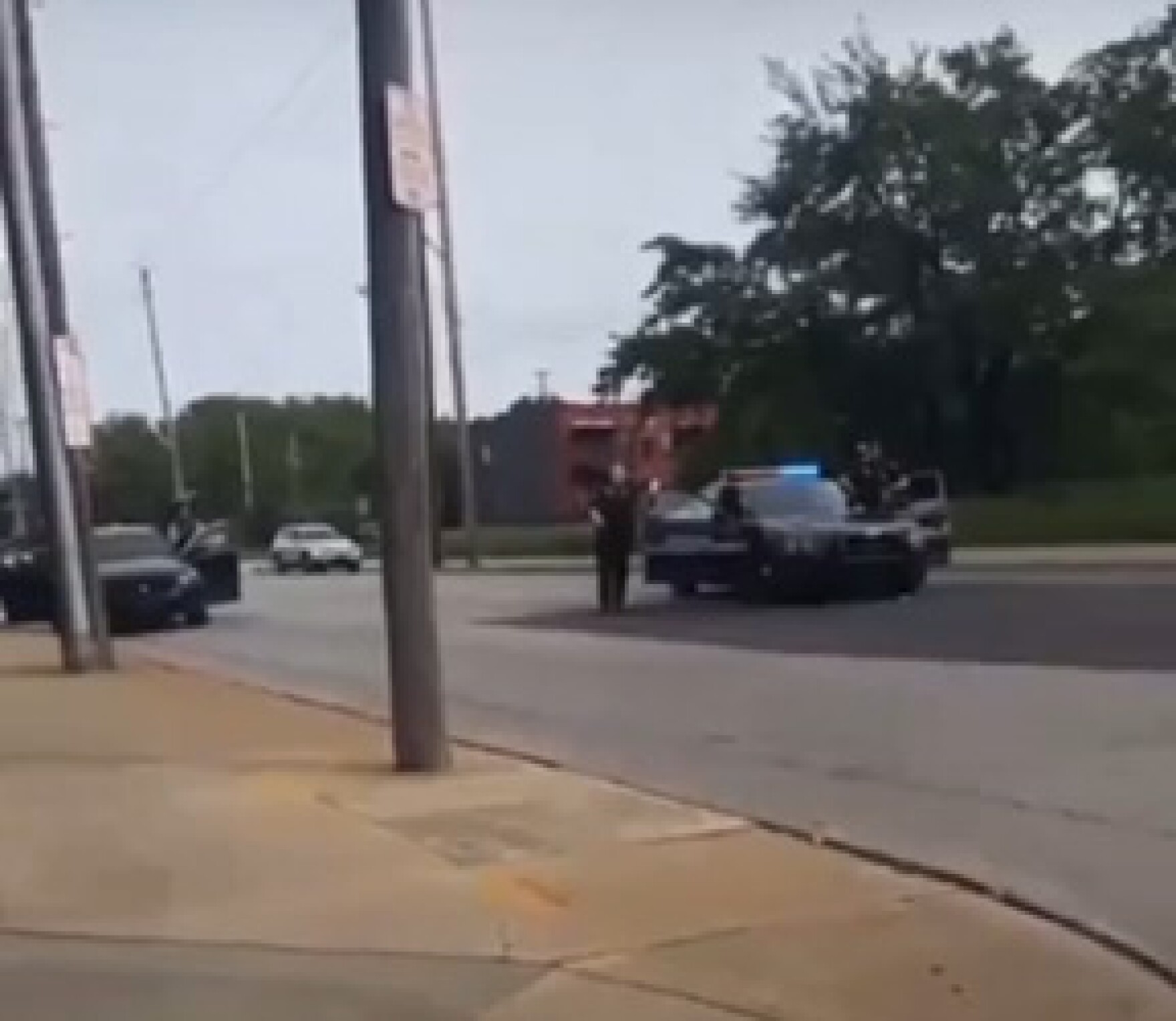 A still from Antoine Tolbert’s video of the incident showing one of the officers who arrested Tolbert, Officer Santa, as he walked down St. Clair Avenue. In the video, Santa Claus did not approach Tolbert and let him go on his way after speaking to him briefly. [New Era Cleveland]

“Listen man, a lot of people don’t like you walking around with a gun,” Santa told Tolbert.

Officer Santa stayed by his car, kept his distance from Tolbert, and finally let him go on his way.

Tolbert points out that the Cleveland police knew him. He spoke to cadet classes about community involvement. Tolbert recognized the officer in the car with Officer Santa Claus from one of these classes.

But according to the police report, things changed when a Sergeant Henderson decided that Tolbert would be detained. Detectives and members of the specialized K-9 unit responded.

“At that point, I was like, wait a minute, something is seriously wrong here,” Tolbert said. “I look around, there is a K-9 in the middle of the street trying to grab me. I wasn’t putting my gun down so that K-9 could attack me or so you could shoot me. 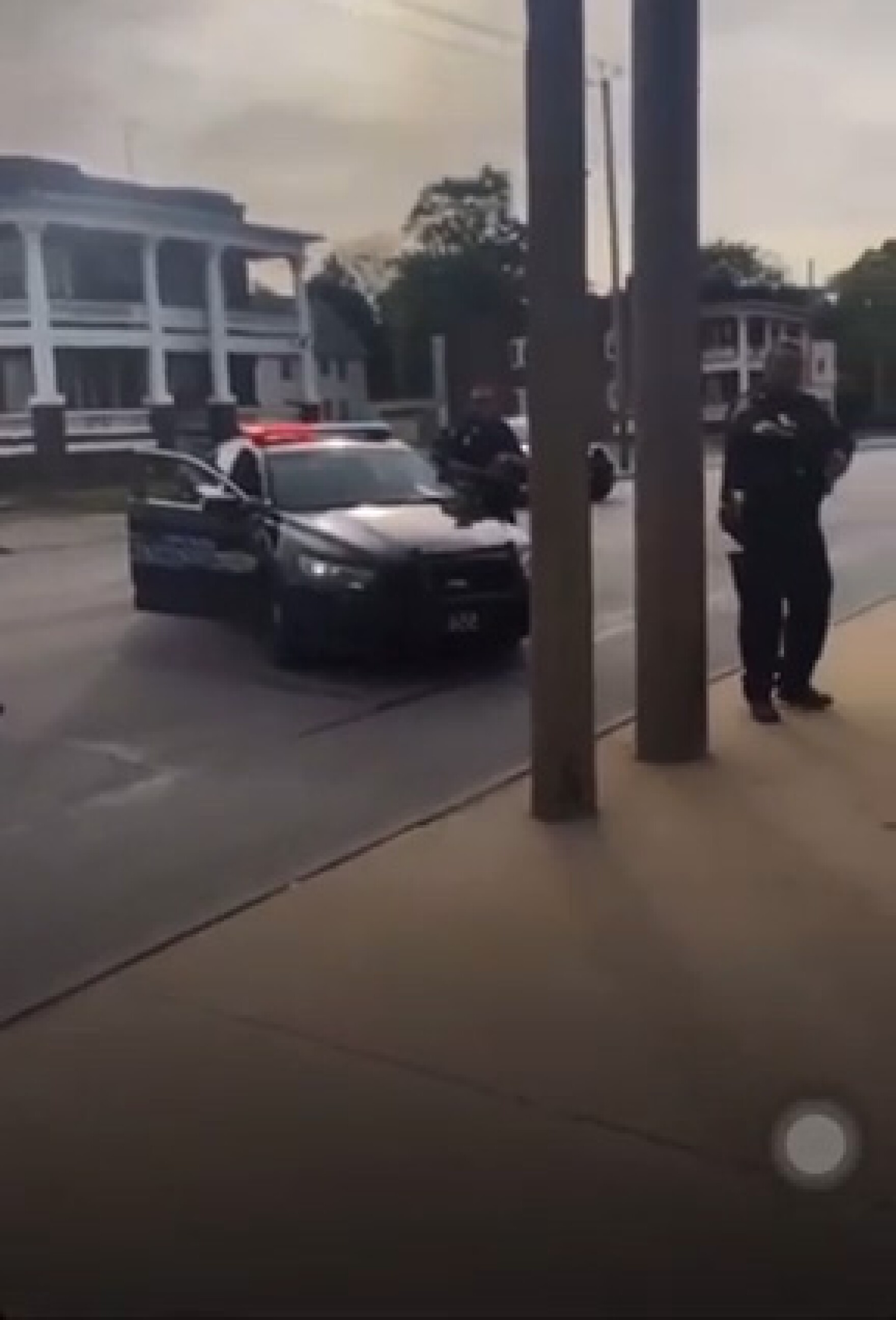 A still from Antoine Tolbert’s video of the May 23 encounter with police shows Cleveland Police Sgt. Henderson walking towards Tolbert. With his gun drawn, Henderson takes cover behind a telephone pole. Another officer approaches Tolbert and arrests him. [New Era Cleveland]

Henderson can be seen in the video blocking Tolbert’s path on the sidewalk, taking cover with his gun raised a few feet away.

Tolbert was initially accused of carrying a concealed weapon and causing panic. Both of these charges were dropped, but Tolbert first spent a night in the Cuyahoga County Jail.

“While the encounter with the police itself was not traumatic, whatever happened in the weeks that followed certainly was,” Tolbert said.

After the arrest, Tolbert said he had to leave his house because his wife’s ex-husband was using the video of the encounter to seek full custody of their young child.

Johnson also said his organization wants to stay out of the gun rights debates that Tolbert’s video evokes.

Tolbert said he would continue to date New Era Cleveland on armed patrols in Cleveland neighborhoods.

He plans to take legal action against the city.

PAPA ROACH releases the music video for “No Apologies”